Out and about this weekend? Stop by the downtown to catch up with PHW at Celebración of Winchester on Sunday, September 23, 11 a.m. to 6 p.m. A PHW board member or two should be around with an assortment of goodies, including a hot off the press early run brochure for the Bough & Dough Shop. We expect to have the Featured Artists portion of the PHW website updated later today or early next week so you can start exploring some of the amazing vendors and items we will have at the Hexagon House in November and early December. 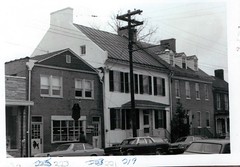 Yesterday’s Board of Architectural Review meeting was a heartening experience after a tough few months of fighting for historic preservation and compromise as the accepted and useful strategy for dealing with problem buildings. Earlier this year, a new developer came to BAR with a plan for the Guitar Studio building on South Loudoun Street. It is a building of the recent past that attained contributing status in the latest architectural survey. Compared to the similarly-aged commercial buildings of the 200 block of East Piccadilly, this building truly is vernacular and of no discernible architectural style. It was likely built in the late 1940s, replacing an earlier frame building of about the same footprint. At some point between construction and the 1976 survey, some “colonial touches” were added that muddled the exterior appearance and “read” of the building.

During the initial BAR meeting in May, a number of the proposed changes were not in keeping with the Winchester BAR Design Guidelines. The majority of the application was tabled while PHW and the owners did some investigation of the building history and reading up on the BAR design guidelines. The applicants returned last night for a conceptual review, having read up, learned more about their building and researched more proposed products. The applicants were very open and excited to bounce ideas off the BAR members and solicited suggestions for further improvement before the application comes up for a full vote.

In the end, the applicant will likely have a new storefront more in line with a 1940s commercial building rather than trying to hang on to some oddball features to make a commercial building look residential. The longtime business resident is not being displaced. Opportunities for increased and improved residential density as well as proactively mitigating concerns is being addressed now rather than later. A situation that could have turned sour and confrontational was instead a pleasant experience of opening new possibilities, compromise and excitement for everyone involved. We are looking forward to seeing a “final product” application for this building.

We hope other applicants approach the BAR process with this same open mindset and willingness to compromise and explore various options. Again, we cannot stress enough how helpful a conceptual review discussion is both for the applicant and the Board of Architectural Review, and we encourage anyone considering a large and involved project to take advantage of this service before becoming married to an idea that may not work well with the Historic District.

Learn more on the city’s website about Winchester’s Historic Districts and Board of Architectural Review.