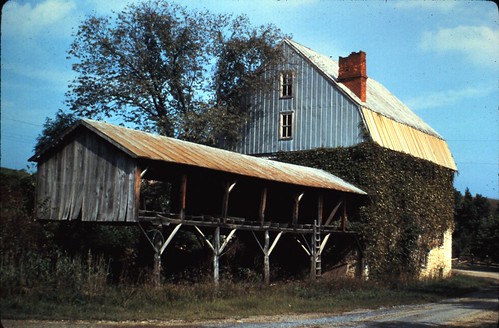 Happy Friday! We had a great time downtown on July 3, and we hope you had a great holiday, too. This week, we have twenty slides to share, including some sites in Frederick County, some Kurtz Cultural Center images, and a few stragglers for the Simon Lauck House. Catch them all at the top of the Flickr photostream!

Since this is a bit of a quiet week, we also wanted to transcribe the article accompanying the oldest photo we are aware of for the Piccadilly and Kent Street intersection on the Central Garage. We believe the following article was written in late 1914 or 1915. That the wonderful development of the automobile will go down in history as one of the greatest wonders of this wonderful age, no thoughtful man can for a moment doubt. Every season improvements are being made and it would seem that perfection is not very far away, though many contend that the machine of the present is comparatively nothing to what the future will bring forth. Winchester is one of the best automobile places in the country, when its size is considered. With the famous and historic Valley Turnpike and other fine roads leading to it from every direction, it is a favorite stopping place for tourists, between the North and South, and hundreds of machines owned by local people. One of the most popular garages in the city, and the only one that is steam heated, is the Central Garage and Machine Shop located at the corner of Kent and Piccadilly streets, opposite the B. & O. passenger station, of which Mr. H. B. Sell is the proprietor. There is ample storage room for a large number of cars. The repair department is by far the best equipped and most complete in Winchester. Only the most expert and skillful mechanics are employed, men who make a specialty of automobile work, and keep in touch with every advance that is made in automobile construction. Mr. Sell is himself and expert mechanist and gives his personal attention to all work entrusted to his care. His facilities for repairing and making broken parts are of the best, much better than are usually found in a small city. He also owns a number of cars which may be hired at reasonable rates. In addition to his automobile business he conducts a general machine shop and most of the large plants in this vicinity, such as the Virginia Woolen Mills and the Knitting Mills are among his patrons. There is no job too intricate or too difficult but that he is prepared to undertake and carry to a successful conclusion. Mr. Sell is a native of this section where he is well and favorably known. He has for years been identified with its business life and is always ready to aid in its upbuilding.