The following is a transcript of the remarks said by Stewart Bell, Jr. at the dedication of the first Winchester historic building marker dedication on October 15, 1967. The marker was placed on the home of Miss Lucy Kurtz, 21 South Loudoun Street. The remarks were found when a scrapbook of early PHW mailers and newsletters was being moved and several sheets fell free of their scrapbook pages. The sentiments said fifty years ago still hold true and remain guiding principles of the Winchester Historic District. Every time you see one of the oval plaques on a historic building in downtown, you can remember this is the spirit in which the plaque program was begun, and one we hope it still embodies today.

Urban progress is voracious. It is often indiscriminate. It has no memory.

Some months ago the Common Council recognized this. They recognized, also, that this is not altogether good for a community. They recognized, as all of us here today recognize, that an old landmark, because of its aesthetic, historic, or cultural significance possesses an amenity value often far beyond and aside from its utilitarian or commercial value. Because this is so, it contributes to the economic vitality and strength of its community. As evidence of this I would point to the fact that Travel is Virginia’s second most lucrative industry and that localities with historic interest and cultural distinction share most generously in its benefits. As evidence of the truth of this statement, I would point to the fact that the level of general retail trade in Williamsburg usually leas that among all the localities of the State.

It seems, therefore, that it is a wise and proper municipal policy to identify some of our older buildings what have cultural significance and architectural integrity and that we endeavor to snatch them from the eager maw of Progress.

To that end, the City has purchased and in various ways preserves three such buildings: Washington’s Office, Stonewall Jackson’s Headquarters, and Abram’s Delight. But the City cannot continue to purchase and preserve as public property all its old buildings. Pursued to its conclusion, such a policy would not only be costly but it would ultimately make our city a necropolis, which is a city without life. This is the opposite of our aim.

In view of this, it was the purpose of the Council when it pass the Ordinance, as a result of this this plaque is placed here today, to indicate that the City of Winchester, as a corporate body, does recognize the value to the community of some of its older buildings and that it is our official policy to join with the owners of such properties to identify and to designate them by placing upon them an official bronze marker.

We hope that the presence of such a marker on any building in our community will in the future serve as a reminder to all who pass by, and especially to each future owner, that here is a building of distinction out of our past. It has survived and it is of genuine worth to our community to keep it if possible. It is, therefore, the policy of the community to attempt to preserve it from thoughtless or wanton destruction. This marker will say, “Think carefully and weigh all the values involved before you determine to replace this ancient building.”

As here and now we dedicate ourselves to the preservation of something of value out of our physical and material heritage, I have to express my wish that we likewise dedicate ourselves to the notions of purity, integrity, dignity and self-respect which are typified by such landmarks as this home, and that we seek to honor and observe these values which have come down to us out of the past. They are among the solid verities upon which all that is worthwhile is our past is built. They are among the solid verities upon which to build an enduring future amid the bewildering changes of our days.

This marker bears the official arms of the City of Winchester, but it is placed on any property only upon request of the owner, who thus joins with the City to designate his property as a cultural landmark. For this reason, I request Miss Lucy (Kurtz) and Mrs. (Godfrey) O’Rear, the owners of this handsome stone house that graces our principal street, to join with me in the placement of this first historic marker. 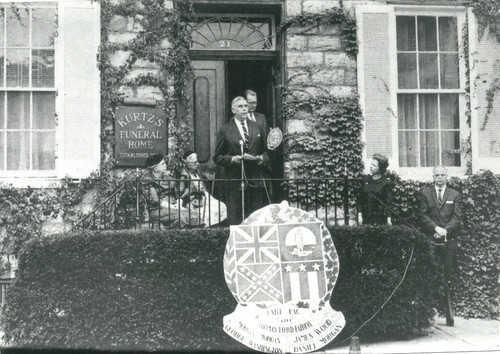 If you are inspired to have a plaque placed on your building in Winchester Historic District, visit the City’s website for the forms and guideline information. Plaques are discussed and approved by the Board of Architectural Review. Currently over 140 buildings in the historic district have been recognized with the official plaque, but not all recognized buildings have had their plaques installed.