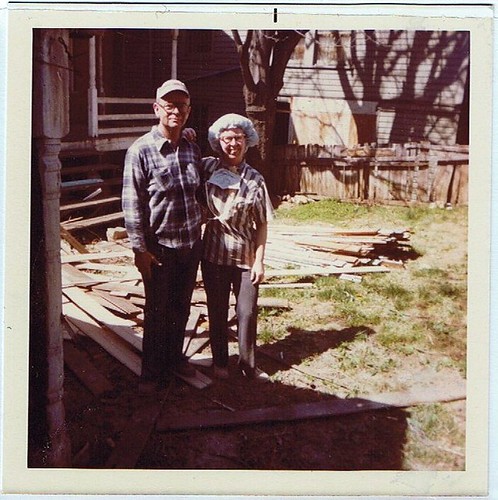 This week we revisit one of the largest undertakings in the history of PHW’s photo digitization project: The Grim-Moore House album. This set is nearly 550 photos taken between 1977-1982 by Virginia Miller during the renovation of this Jennings Revolving Fund house. The Millers documented almost every step they took to save the log and brick houses at 510 and 512 South Loudoun Street, from the initial walkthrough still showing the deplorable living conditions in the apartments, the Victorian details they removed to return the building to something closer to its appearance in the early 1800s, to their documentation of a building too far gone to save, and even a surprise setback when part of the foundation crumbled mid-rehabilitation. The album passed on to the new owners, Joe and Sharon Collette, and was digitized in preparation for a small PHW gathering in the home before the Collettes made some cosmetic updates and opened the house for the 2014 Holiday House Tour.

Part of what made this album both informative and challenging was Virginia Miller’s notes on the back of the photos. Her captions were extensive enough to date and explain what and where the photos were taken, but also rather idiosyncratic, making the transcription process involved. You may see in some of the captions a few unknown words or seemingly nonsensical sentences. The notes were transcribed to the best of our ability, and during the transfer from Picasa to Flicker a few typos and words were corrected.

As we noted when this album was first posted, “[t]his is a fascinating and telling example of how PHW’s Revolving Fund can save ‘junky’ properties from neglect and almost certain demolition and restore them to contributing structures in the Historic District.” If you missed it, only caught a portion of the slides during the Holiday House Tour, or just want to page through some amazing before and after photos, this album should keep you occupied this weekend.