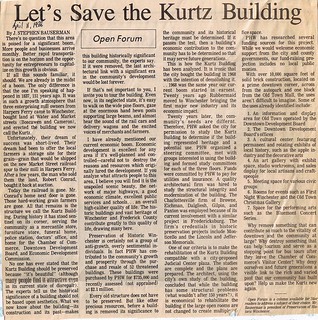 As the period of PHW’s lease on the Kurtz Building was drawing to a close, the plan on how to save the structure and turn it into a productive building once more was unveiled. The plan entailed converting the building into a cultural arts center. The building was acknowledged to be in deteriorated structural condition, and one of the major concerns and criticisms was the cost it would take to rehabilitate the building. PHW vowed not to use city tax dollars, expecting to use state and donated funds for the work, which was spread out over three stages.(1)

The plan caused some of the most heated and protracted back and forth discussion on the fate of the Kurtz Building in the month before the plan was presented to City Council since the Conrad House 25 years before. Along with the support from the preservation community came a determined, yet misinformed, contingent decrying the Kurtz Building project as requiring “several millions” of taxpayer dollars. (2) (3)

Both letters to the editors and additional editorial columns were penned in an effort to clear up the misconceptions on the expected cost (around $566,000) and funding sources (Virginia state taxpayer dollars, but not Winchester City tax dollars).(4)(5) At the same time, another stream of criticism was leveled at the Kurtz for being “ugly” — although no one ever claimed the building’s aesthetics were the sole reason it should be preserved or the basis for its historical significance. (6)

There were still concerns as to Frederick County’s unwillingness to relinquish an option to build on the site, though other Winchester Council members seemed to be swayed by the need for a downtown community center and a cultural arts space.(7) It was enough, at least, to sway the Council to approve the plan, as in the event PHW could not perform the renovation, the Kurtz Building would return to the City and no money would be lost by the City on the endeavor.

The fateful day arrived on May 10, 1988. After hearing the community speak in favor of the plan for a community arts space in downtown Winchester, City Council agreed to sell the Kurtz Building to PHW.(8) As Steve Bauserman was recorded as saying to a reporter after the meeting, “We won.” 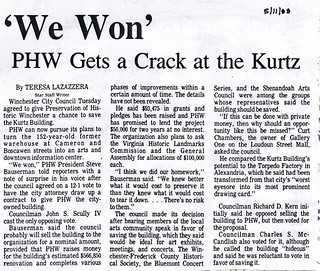