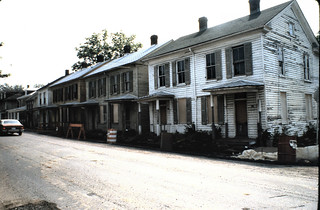 As you may have deduced from past Friday Photos posts, the 1980s were the most active period for the Jennings Revolving Fund. This was a critical period which saw some truly remarkable renovations take place. This activity helped to much of the core downtown after decades of rampant demolitions for parking lots.

The unfortunate side effect of this work is that by returning these buildings to single family use, the renters in the multiple apartments were displaced. The massive amounts of work to the buildings naturally led to a rise in property values and slowly began to change the perception of neighborhoods like Potato Hill from somewhere undesirable to a safe and attractive neighborhood. This displacement, called gentrification, was one of the main criticisms leveled at PHW and the Revolving Fund.

Although PHW’s approach to Revolving Fund purchases was to offer a current renter the ability to purchase the property, in most cases this was not feasible for the renter. The Revolving Fund houses were often in disrepair past the point of someone inexperienced and not financially stable taking on the task of renovating them on their own. It is hard to imagine someone diving into renovations for the first time with properties like the Grim-Moore house, 215 S. Loudoun, or the Huntsberry Building and reaching a successful outcome.

To that end, PHW partnered with the City on a Community Development Block Grant for Kent Street. The CDBG was primarily aimed at reversing blight in rental properties and focusing on maintaining the existing building stock as the likelihood for new construction declined. A secondary motivation was in response to the fear of the downtown as a whole declining as the key anchor stores moved to the Apple Blossom Mall. By keeping the surrounding neighborhoods inhabited, there was more chance of businesses remaining downtown because of the built-in clientele.

All told, the 1980 CDBG project addressed safety and blight concerns in 28 residential properties on North and South Kent Street. Fire hazards were one of the highest cited problems for the neighborhoods. The houses typically lacked central heating and relied on wood stoves, kerosene heaters, or portable electric heaters, all of which raise the potential for fires. The data collection for the CDBG also found many buildings did not have adequate plumbing (some never having been connected to the existing sewer service) and many were overcrowded. There were also insufficient fire hydrants and in some cases the very streets were too narrow for fire equipment to access. 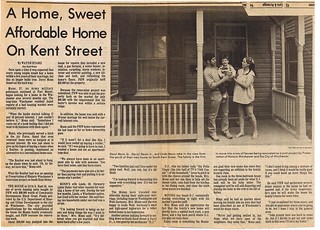 The houses were renovated to provide fire breaks and improve electrical wiring conditions. At the same time, sidewalks, water lines, and sewer lines were improved and the stone retaining walls on South Kent Street were repaired. PHW’s focus was primarily on South Kent Street in the 300 block. Seven of the units on South Kent Street were under PHW’s purview. Although reactions to the project were mixed and it never quelled the concerns about gentrification, one unit in particular was called out as a prime success story.

311 1/2 South Kent was the smallest of PHW’s units and the first to be renovated. Completed and put up for sale in 1982, potential buyers would have to qualify under special Department of Housing and Urban Development restrictions because the house was renovated with CDBG funds. It didn’t take long for the house to find its new owner. After being listed in February and shown in an open house event, the home was sold to Daryl Monn and his family in May. (1) (2) It had been a perfect opportunity for Monn, who had been struggling to find a home. Through PHW, the Monns could realize their dream of home ownership.

A copy of the 1980 CDBG Kent Street paperwork is on file at PHW and is available to researchers seeking more information. See the Flickr album for images of 311 1/2 South Kent Street before and during PHW’s renovation.