As we’ve seen over the past few weeks, PHW was becoming increasingly active in the future of the downtown. When the Huntsberry Building at 157 North Loudoun Street came on the radar as a Revolving Fund purchase, it was a perfect opportunity to demonstrate two proposed methods to keep downtowns vital against the encroachment of large shopping malls. One of these methods was to encourage more historic facade restorations, turning back some of the changes and restore a more authentic view of downtown. The Huntsberry Building would be a perfect and potentially dramatic example of this, as the facade had been covered in a cement and tile mixture in the 1940s or 1950s, obscuring the original Queen Anne details. It was also a perfect case to reintroduce upper story apartments to the downtown. The upper floors of the building had reportedly been vacant for twenty years in 1982. While in disrepair many Victorian-era architectural details were still intact on the upper stories, and the space could comfortably be divided into several apartments.(1)

PHW began with the technical work to tackle the exterior restoration portion of this project, locating archival photos of the building and doing some hands on investigation to determine how the facade had once looked. One of the best guides was a circa 1886 photo, showing where windows had once been located and a different street level configuration of the storefront. John G. Lewis lent his architectural historian expertise to the building as well, confirming through trace evidence left in the building’s interior some of the puzzling exterior questions. 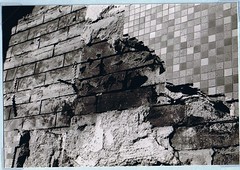 PHW secured a $30,000 loan from the National Trust, matched that amount with a local fund drive, and received a state grant of $14,000 to purchase the building and undertake the facade restoration project.(2) Work on the facade started in September of 1982, and almost immediately hit an unforeseen snag. During the tile removal, the brick wall was found to be very soft, possibly having been made from salmon bricks reused from another building previously on this site. The bricks and mortar were also theorized to have not been wetted sufficiently during construction, causing the mortar to fail much more rapidly than usual. The removal of the window frames, which were structural elements, further compromised the stability of the front facade. Even a careful approach to the cement and tile removal led to dangerous shifting of the wall and more damage to the bricks. 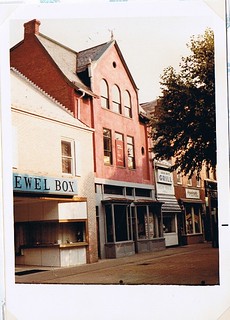 Fearing a collapse should this work proceed, a structural engineer was brought in. The first floor and foundation were found to be in good condition. During this time PHW members made the decision to rebuild in cinder block. In an ideal world, brick could have been custom ordered to replace that which had been damaged, but the committee felt there was a lack of expertise in historic mason techniques, so that the craftsmanship of this approach could not have duplicated the original facade satisfactorily. The cinder block wall would also reduce the weight on the first floor, and when plastered would still provide the intended historic flavor without bankrupting the organization.

Although it was a potentially disastrous situation, the Huntsberry Building facade was rebuilt to much the way it appeared in the 1880s. The project was lauded as a successful experiment, with the apartments being rented soon after their completion in 1987.(3) The only downside was that the reconstruction of the failing front wall with cinder block precluded the project from realizing historic tax credit benefits. Although the owners who undertook the interior renovation put the building up for sale in 1992, the asking price was an indication of the project’s success and a turnaround in the downtown climate. PHW sold the building for $75,000. Ten years and one interior renovation later and the asking price became $300,000.(4)

Be sure to visit the Flickr album to see more images of the Huntsberry Building during the facade restoration, 1982-1983.