This week, we have something that is photo-adjacent from our collections – ephemera. PHW has been gifted a few odds and ends of papers over the years that don’t precisely fall into our main collection categories, but are still related in some way to our mission. A number of these seem to be papers found stashed in walls, under floorboards, or the like and given to us for safekeeping.

You can get a glimpse back in time to the 1948 Apple Blossom parade with the program listing all the units and float sponsors. Be sure to zoom in on all four pages and see how many names and businesses you recognize! 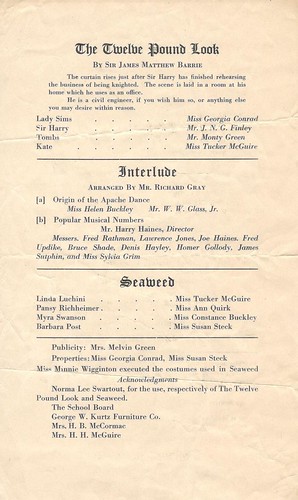 More curious is the handbill for what appears to have been an evening of entertainment and one act plays, perhaps held at the Conrad House around 1924. The first one act play, The Twelve Pound Look, was written in 1914 by J. M. Barrie and adapted as a silent film in 1920. The most succinct (if a bit spoilery) summary of the play can be found at Samuel French, or you can read the play in its entirely at the Internet Archive.

The second play, Seaweed, has been a bit harder to track down, but it is likely the one by Alice Gerstenberg, written in 1924. Seaweed is on the obscure side these days, but it appears to have been a slice of life with four women speculating on their future while at a beach. It is likely PHW ended up with this handbill because of the Kurtz Furniture Co. acknowledgement, but a number of the actors are also familiar names to researchers. The playwright is also a notable figure in the Little Theatre Movement, particularly for children (tying back to our friends at Winchester Little Theatre).

Be on the lookout in future weeks for more ephemera like these two pieces to join the Friday Photos lineup in the new Ephemera album on Flickr!