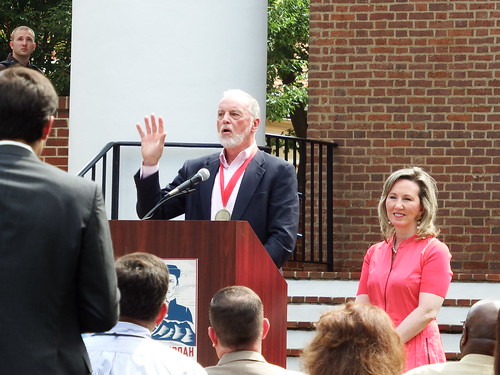 Happy Friday! If you were out and about this morning, you may have seen the crowd gathered on the lawn of the old Frederick County Court House. The Shenandoah Valley Battlefields Foundation (SVBF) held a ceremony to officially announce that the former Old Court House Civil War Museum is renamed the Shenandoah Valley Civil War Museum. The exhibit areas in the museum will be upgraded with new and renovated exhibits, improved signage and displays, new interactive and digital tools, new lighting, new youth activities and exhibits, and a greater focus on the broader story of the Civil War in the Shenandoah Valley – the Union, Confederate, civilian and African-American perspectives.

Winchester Mayor John David Smith, Jr., Congresswoman Barbara Comstock, Delegate Chris Collins, SVBF Board Member Jim Wilkins, Jr., and SVBF CEO Keven M. Walker among others made remarks on the museum, its history, the changing of the exhibits and way it can enhance and expand upon the interpretation of the Civil War past the experience of names and dates at a battlefield. At the end of the proceedings, Mr. Wilkins was presented with the Graves Family Philanthropic Leadership Award in recognition of his philanthropy on behalf of battlefield preservation and other worthy causes.

Be sure to stop by the Shenandoah Valley Civil War Museum at 20 North Loudoun Street (most exhibit upgrades will not take place until winter, so there is still plenty of time to visit) or check them out online at civilwarmuseum.org. If you couldn’t make the event today, you can see twelve images of the ceremony at PHW’s Flickr account.