126-128 E. Cecil Street, once home to Ruth’s Tea Room, appeared before the Board of Architectural Review meeting at 4 p.m. in the Council Chambers in Rouss City Hall. Click here to read the article. The BAR approved the Rose Foundation’s plan to demolish the former site of Ruth’s Tea Room at 126-128 E. Cecil Street based on its unsound structural condition. Click here to read the article in the Winchester Star. The Rose Foundation intends to replace the structure with a close facsimile of the original building, which will appear before the BAR at a later date.

PHW pledges $15,000 to the restoration of the Old Lutheran Church wall in Mt. Hebron Cemetery.The wall, constructed c. 1760, is a local landmark and one of the oldest remnants of a building in Winchester. Click here for the article.

No decision was reached at the July 19 meeting of the Board of Architectural Review concerning the fate of six properties along South Kent Street. To read the follow-up article in the Winchester Star, click here.The next BAR meeting is scheduled for August 2 in the Council Chambers of Rouss City Hall at 4 PM. In the meantime, BAR members toured the properties.

The Robert E. Rose Foundation asked that the demolition requests be tabled while they continue negotiations with PHW at the August 2 BAR meeting. Read the Star’s article here.

PHW encouraged its membership to attend the Board of Architectural Review meeting for the public hearing of the demolition of six properties on South Kent Street (404, 406, 408, 412 1/2-414, 418,) circa 1860 to 1910. The meeting provided valuable feedback not only from PHW’s formal presentation, but also from the neighbors, City Council, and the Rose Foundation. Click here to read the Winchester Star article.

Join PHW for the Annual Meeting and Preservation Awards on June 16 from 3-5 pm at the Education Center in the Lewis Jones Knitting Mill on Kent Street, now the home of OakCrest Companies. Christopher Owens, a noted house restorer, will provide the keynote lecture. Join us for our annual business meeting and presentation of the 2007 awards before partaking in the reception. END_OF_DOCUMENT_TOKEN_TO_BE_REPLACED

Winchester Underground returns on June 9, 3-5 p.m., for tours of downtown buildings rarely open to the public.

The second in the series of tours, Winchester Underground takes you to three hidden treasures: The Hiram Masonic Lodge on the Loudoun Street Mall, the third floor and basement of the Handley Regional Library, and Rouss Fire Hall. Afterwards, there will be a reception with one complimentary drink to all ticket holders at Piccadilly’s Brew Pub.

Over 200 visitors braved the long lines to tour the three locations on a sunny Saturday afternoon. PHW cannot thank our host locations and our patient guests enough for their support of the tour. Read the Winchester Star article.

Each year, PHW honors restoration and preservation projects in the City of Winchester during our Annual Meeting. Submit a nomination for one or more of PHW’s awards to recognize the hard work of our citizens in maintaining our remarkable historic architecture. Winners will be announced at our 43rd Annual Meeting on June 16.

Forms are due back at the PHW office by May 15 for consideration for a 2007 award. Please mail entries to PHW, 530 Amherst St., Winchester, VA 22601, or e-mail nominations to phwi@verizon.net with the subject line “Awards.” 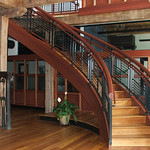 The kickoff event was held in the old Lewis Jones Knitting Mill on North Kent Street, across from the Judicial Center, from 6-8 p.m. Approximately 50 guests toured the fabulously restored Mill. PHW would like to extend thanks to Jim Vickers for allowing us to use the Mill for the first tour location.

Join PHW at the Handley Library Auditorium on 4 March 2007 for a free lecture by noted house restorer Christopher Owens. Click here for the postcard. [Due to illness, Mr. Owens was unable to attend. David Edwards, director of the Northern Virginia Department of Historic Resources, presented in his place.] Read the Winchester Star article covering the event.