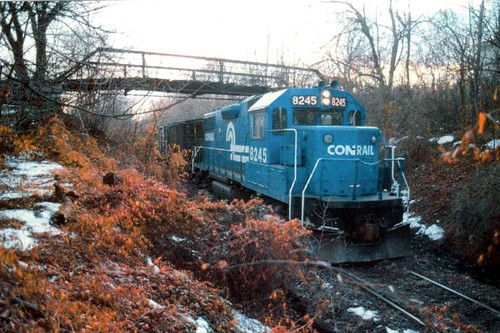 Happy Friday! Although we could not show any photos at our Annual Meeting, we thought you would like to see the progress pictures for one of our Award of Merit winners, Charles and Kelly Hyre, for the work done to retain their unique private driveway bridge at 445 Fairmont Ave. The bridge images submitted in the award nomination packet have been added to the 2017 Annual Meeting album on Flickr. The house, known as Dunheath or more commonly Glen Lee, was built in 1869 for Judge William Clark, Jr. At the time, it was one of the first houses built so far north on Fairmont, and as such it was set much farther back from the street than any other home. All was well until a rail line was slated to run along Fairmont Avenue, cross the Amherst and Boscawen Y-intersection, and terminate at the Cumberland Valley Railroad depot at the corner of Boscawen and Stewart Streets. While the rail line passed in the rear of all other homes on Fairmont, for Glen Lee it would cut directly across the main driveway. In exchange for the right-of-way for the tracks, the railroad company elevated the driveway, constructed the bridge, and lined it with a wrought iron fence.

The bridge was constructed by the Pittsburgh Bridge Company, with the firm Nelson and Buchanan as agents, in 1889. At the time, it was common for Pittsburgh Bridge Company to prefabricate the steel trusses and Nelson and Buchanan would act as the agents and contractors for the installation. To help sell their prefabricated bridges, railroad companies and local government officials were the primary targets for aggressive and sometimes ethically suspect marketing pitches.

While an untold number of bridges were constructed in our region by Pittsburgh Bridge Company from the 1880s until their consolidation with American Bridge Company in 1901, many of the large highway bridges have now been lost to age, accident, or new construction projects. The bridges that seem to still be in service are smaller back road bridges or the driveway examples, like the one at Glen Lee. Almost all are facing structural or maintenance issues after more than one hundred years of faithful service. See some other Pittsburgh Bridge Company examples from around the country at Bridgehunter.com and through the search function at www.historicbridges.org. For more in-depth information on steel truss bridges, check out Bradford County’s Truss Bridges, which includes construction history, engineering information, and historic bridge manufacturer history. And you can see the Glen Lee driveway bridge at the end of the 2017 Annual Meeting and the Fairmont Avenue Flickr albums.