Along with the increased activity of PHW in the 1970s came the need for a formal office space to better conduct the business of the organization. The first temporary office was set up in the south wing of “Fair Mount” on Fairmont Avenue, but already the volunteers were on the lookout for a space to call PHW Headquarters. The search led back to 8 East Cork Street, the small stone building PHW had hoped to purchase a few years earlier.

Now owned by the First Presbyterian Church, the former Friendship Market was looking sadly dilapidated and abandoned. PHW members volunteered to spruce up the interior and exterior of the building for more hands-on preservation work for their future office. An anonymous donor underwrote the expenses of new wiring, insulation, window sashes, doors, ceilings, and leveling the floors. The faux-stone facade was removed from the eastern frame addition, paint was removed from the limestone, the roof was replaced, missing windows were restored, and much of the rear wall was painstaking rebuilt with matching limestone from John Rodman’s farm. Sarah Pugh donated her landscaping skills to complete the exterior overhaul. 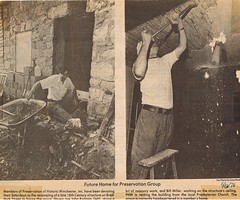 John Rodman and Bill Miller did most of the work, going on-site every Saturday for close to a year preparing the building for its new use. PHW announced its upcoming move to 8 East Cork Street in February 1977, expecting to move in the next month.

Moving day was set for mid-March. Images in the Winchester Star captured PHW volunteers Tom Rockwood and Jay Wetzel moving in the antique furniture to complete the workspace. Just a week later, the PHW Board of Directors held their first meeting in the building, making the building officially seem like home. After a bit of settling in, an open house was held in June of that year. People were encouraged to stop by and take advantage of PHW’s increased visibility in the downtown office. As stated in the March 15, 1977 Winchester Star article, “8 East Cork Street is there for the benefit and enjoyment of all.” (1) The building was to be PHW’s home for the next eight years.